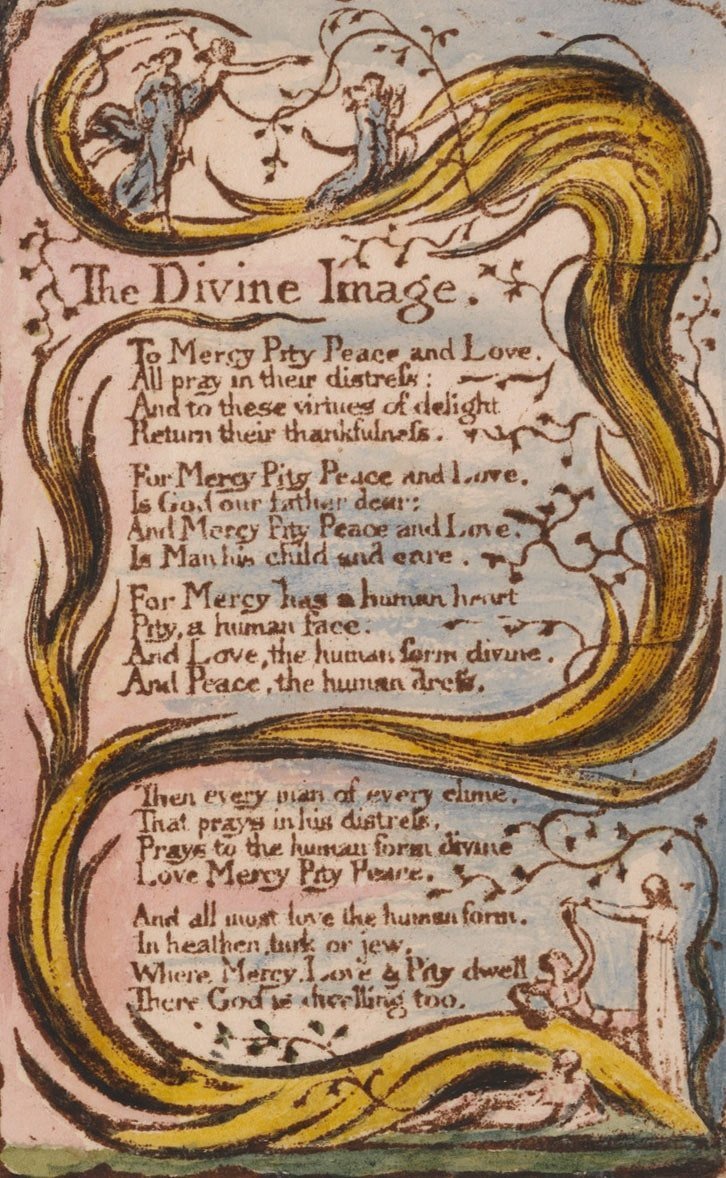 Jason Whittaker reveals how speaking with Blake on a daily basis has shaped his own attitudes to art, religion and politics.

Considering how powerful Blake has been in my life, it would be tempting to say that he has
always been there, and it would be delightful to draw upon memories of reading Blake in childhood – yet they do not really exist. I’m sure that I read – or at least heard – ‘The Tyger’, yet I had no real idea about who or what Blake was. As I moved into my teenage years, music was a pathway into Romanticism, but my Goth sensibilities were attracted much more strongly towards Byron, Shelley and Coleridge rather than Blake. He was on the periphery of my knowledge and understanding.

There was one exception – a running family joke – that gradually piqued my curiosity. My grandfather, an Irishman from Limerick who had the unlikely fortune to be born with the name John Blake, was diagnosed with leukaemia when I was a teenager.

Physically strong, he survived many years with the disease and, having worked most of his life in factories after leaving the army, he discovered a new-found pleasure in painting. Entirely self-taught, his talents were much closer to those of the naïve artist Henri Rousseau and he especially enjoyed painting tigers, copying them in oils from post- cards and magazines. It is one of my greatest regrets that I never kept one of
those paintings. Several times he told me that he was the reincarnation of William Blake, something which would make us both laugh, and thus I gradually became more aware of Blake’s art before his poetry.

By the time I began university, then, I was primed to appreciate the work of my family’s namesake. To be honest, however, aside from a poster of the Ancient of Days on my walls (an image that, once seen, could never be forgot- ten) I still knew little of Blake’s work.

The change, when it came, was profound. It would be tempting to present this as a Damascene moment, a conversion when I suddenly saw the light, but it was instead a deep obscurity and anxiety that took several years to resolve itself. The cause was read- ing The Marriage of Heaven and Hell on a second-year Romanticism module. It must be said that moving away from home had caused a number of cracks to emerge in my youthful Catholicism, and Blake’s strange, astonishing collection of proverbs and memorable fancies would provide the hammer to smash it away completely.

It was not that Blake was anti-Catholic, more that he was perhaps the most divinely inspired writer I had ever come across who seemed to be anti-religion. The effect was so profound that I struggled to understand what it really meant. I wrote very little on Blake as an undergraduate, but I found myself read- ing him more and more and becoming increasingly obsessed with this voice of the devil which challenged everything I thought I knew in terms of faith, politics and even how we viewed the world. As I have later told a number of students during the intervening decades, that year was when the light went on in my brain and which has never since left me.

By the time I returned for my PhD, there was no question about who my studies would focus on, although my particular focus – Blake’s use of British mythology and history – had only emerged more slowly. Rather than religion itself, I had become increasingly fascinated with Blake’s peculiar take on national identity. About a decade ago, my father once asked me whether I had felt myself more English or Irish when growing up. My answer had been easy, but weird: neither – I saw myself as Catholic first and foremost. When that sense of identity collapsed, I had found something unsettling and astonishing in Blake’s later visions of Albion. Before the English, before the Romans – before, even, the ancient Britons this had been an island of giants that, in Blake’s strange cosmogony, was both an archipelago of islands off the north- west of Europe and part of a universal company of eternals in Jerusalem:

All things begin & end in Albions ancient Druid rocky shore
But now the Starry Heavens are fled from the mighty limbs of Albion
(pl. 6, ll. 25-26, E100)

For four, glorious years, I fell down the wormhole of Blake’s bizarre British mythology, where ancient druids were discovered in the Holy Land and patriarchs from the east brought their religion to Albion’s ancient rocky shore. Upon completing my degree, my professional life took me away from Blake, but I had never tired of him and, by the time I had returned to teaching at the start of the new millennium, I was more than ready to strike up conversations in eternity with him once more. Since then he has been a constant companion.

In more recent years, I have found myself increasingly drawn to those two elements of Blake – his attitudes towards religion and nationhood – that attracted me in the first place. In particular, these have fed into my work on the poem that became ‘Jerusalem’ as well as my biography of Blake, Divine Images. I’m always interested in Blake’s art and poetry, with a keen eye towards his spiritual beliefs and philosophy, searching out how he understands revelation not as something coming from out there (which he always categorised as Deism, the idolatry of the false god of this world), but rather finding its source in the inner vision of human imagination. Indeed, the title of my book draws on what has, for many years now, been my own credo, for as Blake writes at the end of ‘The Divine Image’ in Songs of Innocence: