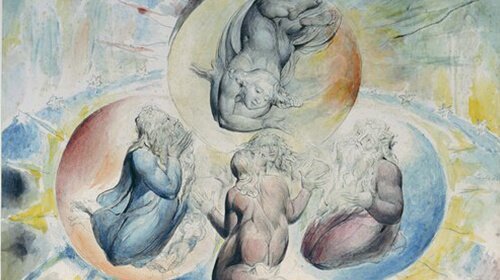 To mark the 700th anniversary of Dante’s death, Luisa Calè asks : What artistic tools, visible languages, prophetic crafts did Blake employ to embody the souls of the damned, test the limits of opaqueness, and capture the translucent experience of paradise?

In Dante’s Commedia vision takes the pilgrim further than words, while the craft of writing struggles to keep up and live up to experiences that exceed human powers – from the horrid depths of hell to the excessive splendour of divine vision. Illustrating Dante was Blake’s last task. In this talk we explore how he responded to the medieval Italian poet’s visionary journey through hell, purgatory, and paradise, discarding its alien theological system of justice and retribution, and focusing instead on translating Dante’s world as an intermedial challenge. Dante compared the technical skills of the poet to those of the blacksmith. What artistic tools, visible languages, prophetic crafts did Blake employ to embody the souls of the damned, test the limits of opaqueness, and capture the translucent experience of paradise? While Flaxman sketched Dante’s forms for reproduction within a corpus of classical outlines, Blake’s watercolours explore of the symbolic possibilities of visual media to express the antagonism between classical forms and Christian culture.

Luisa Calè began her career in Rome studying Italian literature before translating to London where she is a leading expert on English literature at the University of London.

Luisa Calè (Birkbeck College, University of London) is the author of Henry Fuseli’s Milton Gallery: “Turning Readers into Spectators,” and co-editor of Dante on View: The Reception of Dante in the Visual and Performing Arts (with Antonella Braida) and Illustrations, Optics and Objects in Nineteenth-Century Literature and Visual Culture (with Patrizia di Bello). She has guest-edited special issues on “Verbal and Visual Interactions in Nineteenth-Century Print Culture” for 19 (with Patrizia di Bello), “The Disorder of Things” for Eighteenth-Century Studies (with Adriana Craciun), “The Nineteenth-Century Digital Archive” for 19 (with Ana Parejo Vadillo), and “Literature and Sculpture at the Fin de Siècle” for Word and Image (with Stefano Evangelista). She is currently working on a monograph entitled The Book Unbound: Material Cultures of Reading and Collecting, c.1750-1850, with chapters on Walpole, Blake, and Dickens.  She is the exhibitions editor of Blake/An Illustrated Quarterly.

← The Frontispiece William Blake Vs The World →