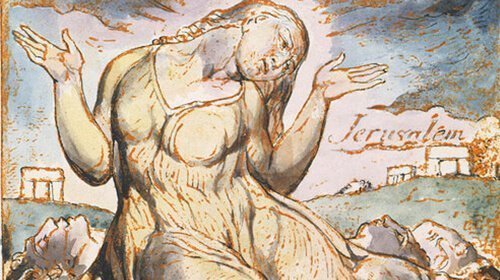 Two scholars, one from Poland and another from Brazil, talk about the challenge of translating Blake, who famously claimed ‘every word and every letter studied and put into its fit place’.

The event presents two intertwined approaches to translating Jerusalem , a pivotal part of Blake’s ‘consolidated Work’, in which, as he claimed, “every word and every letter [has been] studied and put into its fit place.”

The speakers will approach the topic from two perspectives. The first will be more general, aimed at demonstrating that (and in what ways) Blake’s “English” myth is a text of an inter/transnational character and universal application. The second perspective will be more intimate, grounded in the “minute particulars” of the job of a translator of such a demanding poem. The speakers – who are builders of two replicas of Blake’s Jerusalem, that is, the poem’s translations into Portuguese and Polish – will share their testimonies, focusing on both encouragements as well as the obvious challenges: the poem’s imagery, syntax, patterns of rhythm and sound, punctuation, enjambement, intertextualities, etc.

Eliza Borkowska (https://www.elizaborkowska.com/) is Associate Professor of Literature at SWPS University of Social Sciences and Humanities in Warsaw. She is the author of But He Talked of the Temple of Man’s Body: Blake’s Revelation Un-Locked (CSP 2009) and two monographs published simultaneously in November 2020 by Routledge: The Presence of God in the Works of William Wordsworth and The Absent God in the Works of William Wordsworth. She has published articles in Blake/An Illustrated Quarterly and Romanticism, and was a contributor to Bloomsbury’s The Reception of William Blake in Europe (2019), ed. by Morton D. Paley and Sibylle Erle. She has also worked as a scriptwriter and a translator: her grandest project in the latter capacity is the first translation (co-authored by Rafał Stankiewicz) of Blake’s Jerusalem into Polish, which has been work in progress since 2010.

Camila Oliveira is a Brazilian PhD researcher at the Federal University of Rio de Janeiro/King’s College London. The focus of her MA and PhD thesis is Blake’s Reception in Music. Her current project is the translation of Jerusalem: the Emanation of the Giant of Albion to Portuguese. She also translated Jethro Tull’s lyrics Thick as a Brick Two for TAAB 40th Anniversary Edition (2012), Chrysalis Records.