Billy Blake’s Cab or The Vehicular Form of William Blake 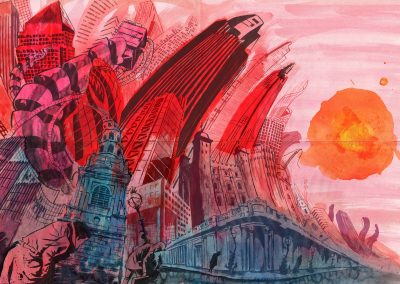 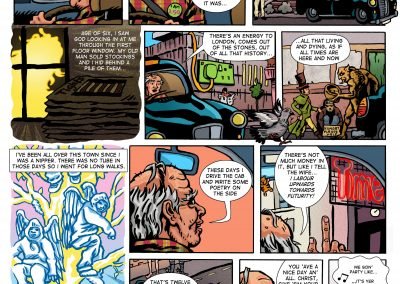 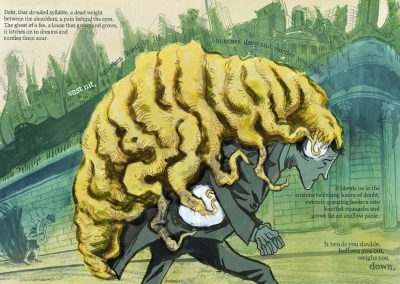 Billy Blake’s Cab or The Vehicular Form of William Blake

March 16, 2022
John Riordan discovered Blake as a teenager and his exploits in illustration and cartooning have been driven by the uncompromising poet and artist ever since.

My mum is too modest to take credit but I’m pretty sure that she introduced me to William Blake. I remember at some point her giving me the crucial piece of info that the Old Testament beardy figures in Blake’s artwork weren’t necessarily the good guys. The first concrete appearances of Blake in my life that I can pinpoint are the Peter Ackroyd biography (1995) and the Blur song ‘Magpie’, which (appropriately enough) filched its lyrics from ‘A Poison Tree’ from Songs of Experience. ‘Magpie’ came out in 1994 (as a b-side of ‘Girls and Boys’) but I’m not sure I twigged that the words were Blake’s until later. Still, I was definitely intrigued enough by Blake to choose Ackroyd’s biography, hot off the press, for an academic school prize the following year. Pretentious teenager that I was, I also chose a collection of Rimbaud’s poetry, as A Season in Hell had been referenced in one of my favourite comics of the time. Unlike the Ackroyd, I have still barely touched the Rimbaud.

I was (and still am) a huge comics nuts and one of the things that appealed to me about Blake from the beginning was that he was a poet and an artist. As in my beloved comic books, the written word and printed image were fully present. Later I would see much more of his illuminated books and admire how the words and drawings swirl around and through each other in bewitching and bemusing combinations. But even early on it was important to me that Blake was about words and pictures, and also that he had been a working, struggling craftsman, not a laudanum-dosed fop. Years later, as I embarked on a perilous career as an illustrator and cartoonist Blake became for me the patron saint of freelance creatives, juggling paying jobs with passion projects.

Another aspect of Blake that appealed to me as teenager was of course his rebelliousness. Blake’s is a relentless, critical voice, insisting that mankind could, should, be so much better than this. He appears a man out of time, an old testament prophet decrying the hypocrisies of his industrialising and our post-industrial age. Growing up in a conservative (and Conservative) commuter town, already feeling ground down by convention and compromise, Blake was a thrilling discovery. In his life, Blake was not a consistently forthright rebel. His later books, in part, dramatise his internal conflict between speaking out and keeping schtum during the oppressive political era in which he lived. But in his writing he is singularly unable to tow the line, to ignore injustice or to find refuge in someone else’s orthodoxy. Inadvertently over the years (and perhaps to my cost) my inner moral voice has taken on something of the tone of Blake’s.

On leaving school I had to choose, at least for a while, between word and image and ended up studying English Lit at university. The syllabus was designed around the impossible conception that over three years we would study the whole of (white, western) English literature from Beowulf to the present day, an author a week! (This has left me with a helpfully broad but frustratingly shallow knowledge of literature.) But during the term in which we tackled the Romantics I wangled spending two whole weeks on Blake, though at this point I was solely reading him, sans artwork. In my final exam, writing on the ‘Garden of Love’ from Songs of Experience, grasping for a more contemporary evocation of the poem’s description of pastoral desecration I came up with… the Blue Peter Garden. For those of you unaware of this cultural touchstone, the Blue Peter Garden, based at the BBC’s Television Centre was vandalised in 1983. I would have been five at the time and I remember watching the edition of Blue Peter in which Janet Ellis sorrowfully revealed the damage and asking my mum “why would somebody do this?” 16 years later, sat in that exam hall, this seemed to me to be more and more resonant. Was this, I wondered, only slightly joking, the moment in which my generation passed from innocence to experience, in which we realised that evil had entered our Eden?

In 2007 I took my illustration portfolio to see the deputy art director of Time Out magazine and accidentally pitched to them the idea of a weekly comic strip called ‘William Blake, Taxi Driver’. As the name suggests, this featured William, reincarnated by a never-explained process as a London cabbie, whose visionary powers allow him to experience all of London history and mythology, and to take fares from its denizens. When I mentioned this idea to a friend he joked “You’ll never guess who I had in my cab the other day? The Four bleedin’ Zoas!” but I was able to weave in frustratingly little of Blake’s mythology. Still, the strip ran for two years, from 2007 to 2009, (which in retrospect I find remarkable for such a weird, niche concept) and over that time my William Blake met everyone from Gilbert and George to Boudicca, and Milton, as is only right, got a couple of rides in the cab. By complete coincidence I also got a couple of great Blakean moments – his 250th birthday, for which I was allowed to expand to a full-page strip, and the 2009 recreation at Tate Britain of his panned 1809 exhibition. I had accidentally come up with a very labour-intensive method of creating a weekly cartoon. Because William was the only regular character, a device by which we met that week’s guest, each episode would involve large amounts of research into his passenger, then to be boiled down into a stupid gag. It was a bit like Peter Ackroyd, condensed into a four-panel cartoon, with occasional knob jokes (and indeed a drunk Ackroyd graced William’s cab in one cartoon). I confess that I was finally a little relieved when William bowed out on the 100th strip, a victim, inevitably, of Jack the Ripper, but I felt for my wonderful editor, Peter Watts, whose ‘Big Smoke’ section of the mag, full of London lore and hearsay, was axed by new editor Mark Frith, the genius who gave us, erm, Heat magazine.

In 2011 I finally got to go to art school. I enrolled on a one-year MA in Illustration at Camberwell College of Art: ‘O lovely Hills | Of Camberwell, we shall behold you no more in glory & pride’, (Jerusalem, pl. 84, ll. 4-5, E243). Casting about for an idea for my big illustration project, I once more felt Blake bubbling up through my subconscious (or entering into my foot?) as I took a shower. The austerity years were in full swing, Albion was being smothered in his sleep by debt and recession, Occupy were camped out in the churchyard of St Paul’s. I wondered whether I could attempt a Blakean take on the financial crisis. As he mythologized the events and conceptual conflicts of the American and French Revolutions, could I do something similar with our economic catastrophe? Adopting a self-consciously epic tone, I scribbled pages of verse in a folder labelled BAD POETRY and then set about illustrating the gods, demons, and demiurges of financial capitalism. Eventually, the result was Capital City, a twenty-page fever dream of writhing, demonic London skyscrapers, exploding Gillray bankers and parasitic debt monsters:

Debt, that dreaded syllable, a dead weight
between the shoulders, a pain behind the eyes.
The ghost of a fee, a louse that grows and grows,
it latches on to dreams and
curdles them sour.

Capital City won me an award from the Association of Illustrators, got me a profile in the pages of the New Statesman and won me appropriately few commissions. I think Blake would have appreciated that.

Twenty-five years after my initial encounters with Blake, why do I still care? Why is he still my favourite artist and inspiration? I am still drawn to the radical nature of his project. As Blake grew older, as he and his art matured, he was forced to face the disappointing truth about the society in which he lived. The great spiritual and political revolution he had hoped for did not happen and was clearly not about to. Although, unlike Blake, my country has not been at war for the majority of my life, I find myself living in a political, economic and cultural system that rewards short-termism and promotes selfishness and cynicism. Mainstream politics seems determined to teach us the wrong lessons about how to flourish on this planet and human life, energy and vision are squandered as we continue on our death-wish drive to trash the biosphere. The utopian hopes of my teenage years have not come to pass, and as Jarvis Cocker crudely but effectively put it “C***s are still running the world”.

Which is all a way of saying that one of the things that chiefly interests me in Blake right now is the idea of consolation. “I must Create a System, or be enslav’d by another Mans” he famously wrote (Jerusalem, pl. 10, l. 20, E153). He was forced to live in a system designed by Newton, Bacon, Pitt and Napoleon but in his art, particularly in the later books, he attempts to devise his own spiritual and moral universe – a myth that explains and excuses the devastating failures of Blake’s (and our?) time, but that crucially also sites them in a larger epic sweep leading to redemption. Is it possible to wrestle hope meaningfully from our situation, to create a salvation that is more than wilful self-delusion? I am genuinely not sure of the answer but I think that I find Blake’s attempt heroic.

My current Blakean endeavour is to write and draw a graphic novel biography of Blake’s life. I want to explore how the life feeds into the work, how Blake’s domestic and commercial life fed (or frustrated) his Imagination. I have given it the tentative working title of Los. To us, his fans, Blake’s life and work look heroic, but there must have been times when they seemed to him to have been failures. I’m currently in Research Hell (or Heaven?), learning more about Blake but also about life in the late 18th and early 19th centuries. “I labour upwards into futurity” Blake wrote in A Small Book of Designs (Butlin 1981: #230, pl. 379). Don’t we all, William? Don’t we all?