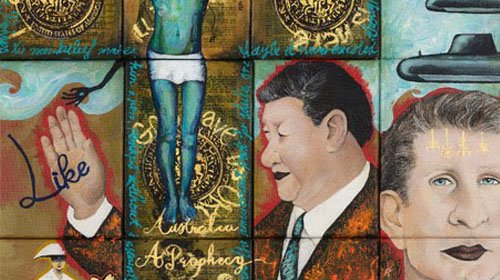 The 2023 AGM will be followed by a talk from artist Carl Gopalkrishnan on his painting Australia Prophecy.

AGM followed by Australia a Prophecy

The Annual General Meeting will be followed by a talk from artist Carl Gopalkrishnan.

Speaking to us from his home in Perth, Western Australia, Carl will share his experience of using William Blake’s 1793 poem, America a Prophecy, as a lens to explore the mythic, subconscious, and literary constructions of military interventions in the Indo-Pacific in his painting Australia a Prophecy.

For this painting, Carl invited Blake’s 18th century creation Orc to travel forward in time to Australia. Orc guides an alternative, imaginary lens that usurps the conventional analysis of the political, military, and international intervention currently shaping the region. Blake’s poem inspires insights into the complex emotions and desires which seem to drive the masculine, messianic, archetypal thinking of new global conflicts.  Using close-ups of his painting, Australia A Prophecy, Carl will do a ‘reading’ of his painting and illuminate how his imaginary conversations with his time-travelling Orc in the Australia of 2021, helped him to see Facebook, the AUKUS agreement, Jesus, Dior and our mobile phones as the same mythic energies which aroused Blake’s passion, anger and political awakenings in 1793.

Carl Gopalkrishnan has used poetry and literature as part of his visual art practice for 35 years. UK-born, Carl grew up in Sweden and has been influenced by the religious and philosophical perspectives of many cultures, not least his Chinese and Indian heritage. At the same time, he has a deep connection with English history, arts, and culture. Largely self-taught, he has not followed a formal or academic artistic pathway. Instead, he has chosen an experimental and experiential journey of self-learning by collaborating with artists and researchers on topics as he strives to understand the human condition.

6  Election of the Honorary Officers for 2023

7  Election of the Executive Committee of Trustees for 2023