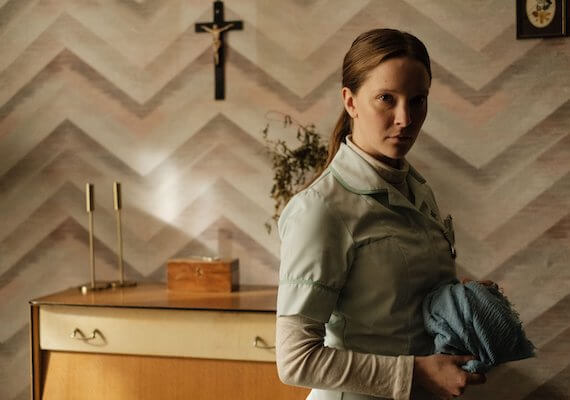 Saint Maud is a taut, psychological horror film from first time director, Rose Glass. It stars Morfydd Clark as the eponymous Maud, an agency nurse who is assigned to care for terminally ill patient, Amanda, a former dancer and hell-raiser played by the luminous Jennifer Ehle (who, among other things, will always be my Elizabeth Bennet). Maud is a recent religious convert and, as her fervour grows and twists into something altogether less savoury, she sets her sights on saving Amanda’s soul before she departs this world. The Blake connection comes when Amanda gifts Maud a Morton D. Paley book on Blake. She is taken by his artwork and the little that she learns of Blake’s fiercely personal take on religion, and soon his apocalyptic spiritual imagery is incorporated into Maud’s religious psychodrama. One can’t help but feel a little bit sorry for Blake. Why is it that he is always brought in to ‘inspire’ the psychopaths and serial killers of cinema? The most obvious comparison is to Red Dragon’s Francis Dolarhyde, who kills innocents in order to transform himself into Blake’s monster (bad enough), and then, to the horror of Blake scholars, goes on to eat the original artwork! John Higgs’s William Blake Now: Why He Matters More than Ever (2019) has an excellent chapter in which he explains the appeal of Blake’s imagery to film makers, heavy metal bands and computer game designers looking to inject a bit of gothic, brooding melodrama.

This is not a criticism of Saint Maud, which is whip smart and genuinely disturbing. If Blake is ever so slightly used as window dressing then Glass’s moody direction makes his art look fabulous, and she clearly knows enough about Blake to show us that Maud is not getting the message. Though she thinks herself a saint she is a lost soul, and she completely missed the point of Blake. Her religious zeal is a response to trauma, but instead of embracing the restorative power of imagination she makes Blake’s angels and demons part of her shrine (literally) to martyrdom and suffering, with a very un-Blakean focus on the mortification of the flesh. “Never waste your pain” she says at one point. Her idea of religion is to fulfil the demands and pass the cruel tests of a disembodied voice.

As the film reaches its inevitably grisly conclusion, it begs the question, what separates one person’s prophetic inspiration from another’s dangerous delusion? In the realm of personal spirituality, how to distinguish the Poetic Genius from psychosis? By their outcome?
Saint Maud is a great film, featuring an astonishing central performance from Clark as the twitchy, malevolent nurse. It is scary but beautiful to look at, filmed in alternately rich and sickly hues, and with a final scene that will stay burned into your imagination. As a Blake fan, one can’t help but wish for a film in which exposure to his work steers a troubled soul away from the darkness and towards the light.